When the Ebola virus exploded in West Africa in 2014 the world held its breath. The frightfully unpredictable and lethal disease tore through West African countries who struggled to contain the contagious disease due to a lack of infrastructure and poor crisis control processes.

It was against the backdrop of this epidemic that an unlikely hero came to the fall by introducing a ground breaking product which controlled the outbreak and assisted both local and international doctors and nurses working around the clock at pop-up clinics in Sierra Leone.

The purpose of these clinics was to perform blood tests on thousands of people to determine if they were carrying the disease and needed to be quarantined. Each patient had their information filled out on a form which was linked to their blood sample via two corresponding barcodes. However, as the Ebola virus is transferred through bodily fluids it could be contracted from a contaminated vial. To combat this each vial needed to be disinfected. The disinfecting process, however, affected the integrity of the labels, making them unreadable and the patient’s information inaccessible.

After The World Health Organisation (WHO) put out a global call to develop a solution, The Nation Health Laboratory Service of South Africa, who had previously commissioned Uniprint for similar blood books, notified the WHO that they knew a company who may be able to help. The Uniprint team immediately began researching and conducting trial runs to come up with an urgent solution.

After 3 – 4 months of research and testing, Uniprint developed the Ebola Clinical Specimen and Laboratory Testing books, each of which contained 25 sets of Ebola Investigation Forms. The barcoded labels in the books were the game changing development. These labels were covered in a European imported plastic film and die cut on Uniprint’s Hunkler Web Finishing Machine to make them impervious to water so the unique barcodes wouldn’t fade or run when being disinfected. The initial order of 4000 books enabled doctors and nurses in Sierra Leone to test 100 000 people and for the first time in the outbreak they were able to crucially match the right information to the right blood sample. 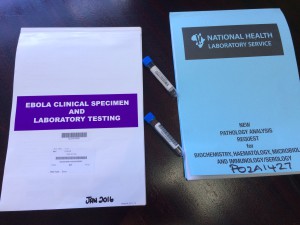 Uniprint’s simple solution to this global problem is the reason why their unique solution was preferred to larger companies in Europe and around the world. While others said that it couldn’t be done, Uniprint rolled up their sleeves, put their heads together and developed a solution which had a global impact. 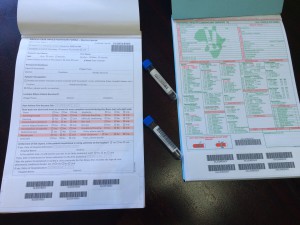 “People label us as a printing company,” said National Sales and Technical Manager, Stuart Harris, “but we’re more than printers. We’re problem solvers. We had the materials and we found the solution to a worldwide problem. We’re incredibly proud that we could help make a difference”.

Uniprint’s development of the Ebola Case Investigation Form may be a small part of the greater scheme, but it made all the difference in an epidemic which posed a global threat. Once again Uniprint has proven to be an effective problem solver and a reliable partner in crisis situations. When it comes to new projects and new solutions, Uniprint continues to shine and in the face of international catastrophe they have shown that even a printing company from Durban can make a big difference.